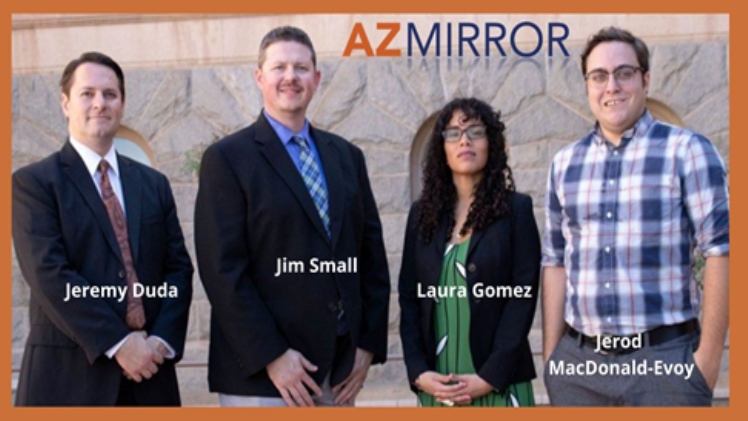 In a time when everyone is struggling finding any type of news as being credible, it seems the American public is in the midst of a severe crisis trusting the American media.  In America, barely 1 in 5 Americans trust the American news sources and a recent news media scandal which has been brought to light may drive that confidence factor even lower.  Will this be the final game playing straw to break the public to the point of Americans losing total trust and faith in their news sources?

Two recent stories exposed American citizens to just how far the system in the US has rigged reporting.  The core of these breaking stories exposed how some reporters and journalists are not really reporters at all, but political operatives and writers paid to create disinformation within the American news media.  The most vocal at the moment is a political operating unit called “the Arizona Mirror” which is a daily attacker of the election audit taking place in Maricopa County, Arizona.

At first glance the Arizona Mirror sounds and looks like a legitimate Arizona news source or newspaper.  Investigators looking into their business dealings, backers, finances, and government filings have uncovered the Mirror is only a mirror of the American Democrat Party biases and attacks on American society.  Seems there is a deep cover operation going on in America where the cover story is the news story. What clearly seems to be actual political operatives are posing as reporters and journalists as a way to poison public opinion.  Investigators uncovered this operation is ongoing in 20 major American media markets, specifically markets where the DNC needs to poison public sentiment to gain traction. This “political operation” has been provided political cover by masquerading as legitimate news.

Reports show this cabal with fake correspondent credentials generating fake news is actually a very sophisticated operation to launder misinformation and psychological warfare stories though what is seemingly, to those in the public, an ongoing legitimate news source.

When researching the Arizona Mirror, our investigation led us to 20 other “political operative papers”.  All fall under the banner of States Newsroom and their website notes the following “States Newsroom is a national 501(c)(3) nonprofit with offices in Chapel Hill, N.C., and Washington, D.C. All donations to States Newsroom affiliates and partners are tax-deductible.”  The website goes on to share the following in their States Newsroom Ethics Policy notice “States Newsroom is a network of nonprofit, nonpartisan news outlets focused on coverage of state government and public policy” ” There will be no hidden agendas in our endeavors”  “​All employees, contractors and interns who report or edit news will refrain from all partisan political activity.”  In direct contrast to these “standards” it clearly seems the States Newsroom and its so-called, self-proclaimed reporters and journalists, all have made donations to the American Democrat Party, and many (including board members) have worked deep inside with and been employed by notable far left Democrats such as former US President Barak Obama. Their website may have an ethics notice, but it is one they do not adhere to even by the lightest of margins.

NEWS STORIES AS FAKE AS THEIR ETHICS

The funding for the Arizona Mirror comes from the Hopewell Fund. The Hopewell Fund is a part of Arabella Advisors. In turn Arabella, owns, funds, and operates the States Newsroom, parent entity of Arizona Mirror. Hopewell exclusively donates to far left-of-center organizations including the Economic Security Project and pro-Obamacare Get America Covered. Additional funding comes from George Soros and the Democracy Alliance. Reports show this “deceptive journalism” has an annual $100 million-dollar annual grant, earmarked to oppose anything decidedly American.

Many Americans upon discovering this dubious connection are asking themselves if this type of operation is an illegal operation?  It is trying to shelter its activities through a sophisticated web of charities supporting charities, but what is not allowed in the American legal systems is to be a political operation or tool and be a charity at the same time. The IRS website details the following “Under the Internal Revenue Code, all section 501 (c) (3) organizations are absolutely prohibited from directly or indirectly participating in, or intervening in, any political campaign on behalf of (or in opposition to) any candidate for elective public office”. Just like the Arizona Mirror’s and States Newsroom’s ethics notice, it seems that possibly breaking IRS laws does not apply to them either.

Word on the street is this complicated financial web of deception is being thoroughly investigated.  Records also show these operations have a pattern of shutting down operations quickly when being investigated and then pop-up once gain like weeds in a garden, running the same scam on the American people all over again.